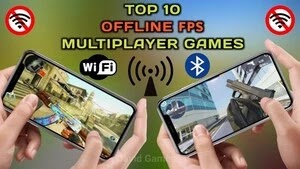 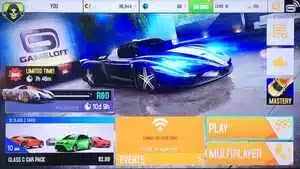 One of the premier car racing games for Android and iOS, Asphalt 8 comes with a sophisticated local multiplayer mode. You can race against up to 8 players in a single session. To use the local multiplayer option, you will have to get everyone connected to the same Wi-Fi network. Since an internet connection is not required, you can just create a hotspot on your phone and ask everyone else to join it.
Once done, launch the game and head into More Racing Options button > Local WiFi > Create Room/Join Room. You can choose from a selection of race types and tracks such as Classic and Elimination. Asphalt 8 also lets you define the class for cars so that you know everyone is competing on a level playing field.
Download: Asphalt 8 for Android | iOS (Free)
2. Mini Militia – Doodle Army 2 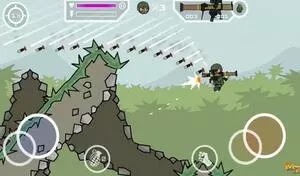 Mini Militia’s simple-yet-challenging mechanics make its co-op mode extremely engaging.
You can invite most of eight players (including yourself) to multiplayer combat. Like some other games on this list, Mini Militia’s multiplayer option runs on local Wi-Fi instead of Bluetooth. There is a vast range of open-world maps and game types to select from. Plus, you can play as teams of two or four.
For the uninitiated, your objective in Mini Militia is quite straightforward. You have to shoot your opponents whilst controlling a goofy character. The player with the most kills at the end is victorious.
Download: Mini Militia – Doodle Army 2 for Android | iOS (Free)
3. Dual! 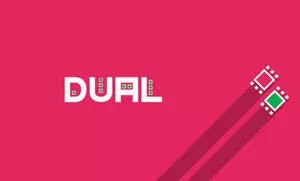 Dual! puts a more entertaining spin on the local multiplayer mode. While here too you will be connecting with another player wirelessly, Dual! requires you to hold the two phones close to each other.
The two-player game transforms both the screens into one, large space. You can then engage in a duel by shooting from one screen to the other, join hands to defend the middle from an army of intruders, or try to score and deflect goals.
Dual! features a minimalistic set of graphics, mainly to ensure there’s no delay when the pixels exit one screen and enter the second. If you enjoy Dual!, you may also want to check out the best two-player mobile games to play anywhere.
Download: Dual! for Android | iOS (Free)
4. NBA Jam 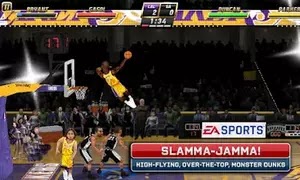 EA’s NBA Jam is a wacky spinoff of its full-fledged NBA game.NBA Jam swaps the high-definition elements and precise physics with a retro theme and old-school controls.
Everything has been raised to an over-the-top level. A slam-jam is often accompanied by a trail of fire, and in the big-head mode, the celebrity players have massive heads on top of regularly sized bodies.
You can experience all of this in the local multiplayer mode as well where you go head-to-head against a friend over either local Wi-Fi or Bluetooth.
The game options each NBA team and maybe streamed to AN android TV.
Download: NBA Jam for Android | iOS ($4.99) 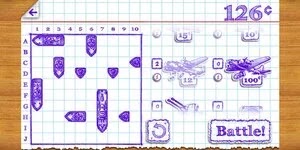 Sea Battle 2 is your classic warships game, but with some modern features thrown in for good measure. It has notepad-style graphics which are reminiscent of the times when kids used to play the game on paper.
The rest of the concept is identical. You have to guess which locations the enemy’s ships are parked and drop bombs on them until the fleet has been sunk.
In the local multiplayer mode, you can battle against a friend. Alternatively, you can play a co-op game on a single phone and take turns to attack and set up ships.
Download: Sea Battle 2 for Android | iOS (Free, in-app purchases available)

Badminton League lets you virtually put your badminton skills to test. It offers fairly standard gameplay and doesn’t demand a lot of practice to master the controls. Of course, it will take you a few matches or tournaments to perfectly execute powerful shots like smashes.
You can either go online and participate in global championships or invite a friend to create a local lobby. You have the option to choose from a handful of outfits and grounds even in the local one-on-one mode.
Download: Badminton League for Android | iOS (Free, in-app purchases available) 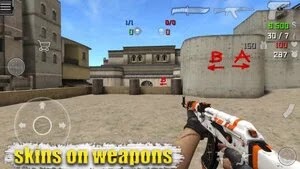 You can think of Special Forces Group 2 as the mobile version of Counter-Strike. It’s a first-person shooter and houses nearly every bell and whistle you’d expect from such a game. You have several game modes, maps, guns, grenades, weapon skins, and much more.
You can play against computer bots in the single-player environment or host a local lobby to invite friends. In addition, Special Forces Group 2 has separate modes for a router and mobile hotspots which you can select depending on the number of players you want in a session.
Download: Special Forces Group 2 for Android | iOS (Free, in-app purchases available)
8. Pocket Tanks 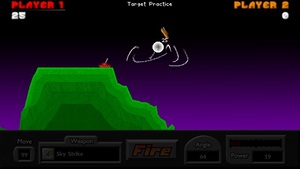 Pocket Tanks has been around for ages, and even today, it remains the best one-on-one strategy mobile game. It still features the same undemanding mechanics and interface. Your job is to simply annihilate your opponent by figuring out the right angles and pace for your projectiles.
There is a wide variety of missiles and weapons you can equip to bring down the enemy. You can challenge your friends in the local multiplayer mode which functions over a Wi-Fi hotspot.
Download: Pocket Tanks for Android | iOS (Free, premium version available)

Final Words:
By downloading these local multiplayer mobile games you’ll be able to play with friends standing next to you. Which is always more fun than playing random strangers online. If you don’t believe us, try it for yourself.