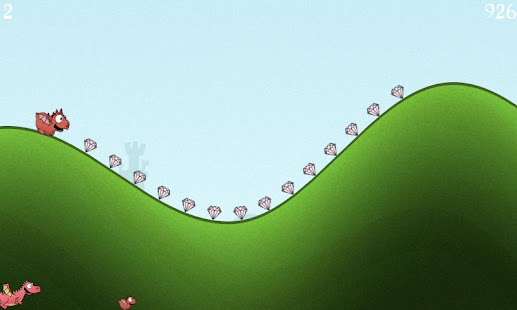 First up is a game called Dragon, Fly. The goal of this game is to help a baby dragon run away from its mother. Since the baby can’t fly very well you have to use the slopes of hills to ramp yourself into the air. Timing is key to hit the slope at the right angle and maintain all of your speed out of the ramp.
What makes it addictive? This game has two addicting aspects to it: simplicity and game length. It’s very easy to play. All it takes is one working finger. It’s also very easy to evade the mother for a substantial amount of time. If you’re really good just two games could take 15-30 minutes.
2)EDGE:

Edge is a puzzle game that puts you in control of a single block on a floating map with no edges. The goal is to safely reach the end of the map without falling off. The camera angle and controls make it harder than it seems. This game also requires some thought and problem solving to solve each level.
What makes it addictive? You can fly through levels pretty quickly at first, but then it gets more difficult. This lures you into thinking you can beat each level. When you fall off the edge you’re immediately re-spawned at the last checkpoint, so there is never any “end of game” screen to give you a chance to quit.
3)GRABATRON:
Grabatron gives users the opportunity to play a game in the role of the aliens. Instead of defending the earth you get to destroy things and pick up your alien buddies. The goal is to rack up enough points to advance to the next level and hopefully upgrade your flying saucer and claw.
What makes it addictive? Grabatron is very open-ended. You can fly around and abduct people, or just destroy stuff. Random challenges will pop up occasionally to keep you busy, but you can easily just wreak havoc on the town and citizens for hours if you so choose.
4)Jetpack Joyride: 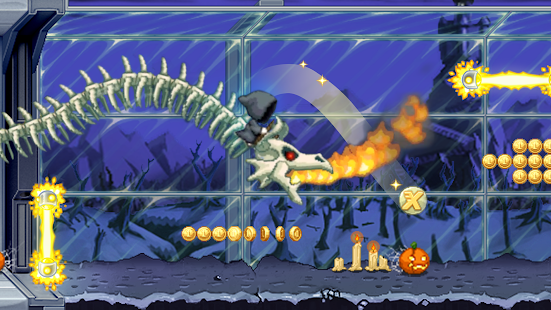 There are tons of games that use the “hold your finger to go up” mechanic, but Jetpack Joyride is my favorite. There are plenty of unique power-ups, like the Gravity Suit, and you can buy items to improve your character as well. You can be doing really well, but one mistake and all your progress are erased.
What makes it addictive? Jetpack Joyride is incredibly simple, but that makes it so frustrating. Every time you die your immediate next thought is “I can do better than that,” and you try again. Since there are no checkpoints you have to do it all over again to try to beat your score.
5)Osmos HD: 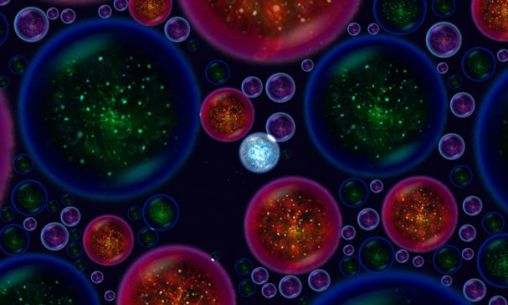 Bubbles are a lot more exciting than you might think. In Osmos HD the goal is to collide your bubble with smaller bubbles to grow, but every time you move your bubble it shrinks a little bit. If you touch a bubble that is bigger than your bubble it will start absorbing you. Sometimes there are different tasks, but it usually revolves around absorbing bubbles,
What makes it addictive? This game is hypnotic. The game moves a little slow and the music is very soothing. If you’re not careful it will pull you in for hours.
6)Smash Hit:

Breaking glass is fun, and that is all you do in Smash Hit. You are given a limited amount of marbles that can be flung at glass obstacles. You need to break them in order to safely pass through. To collect more marbles you can smash glass cones and collect other power-ups along the way.
What makes it addictive? It’s very satisfying to break things, especially glass. You’ll find yourself playing over and over again just to hear that shattering noise.
7)Stupid Zombies: 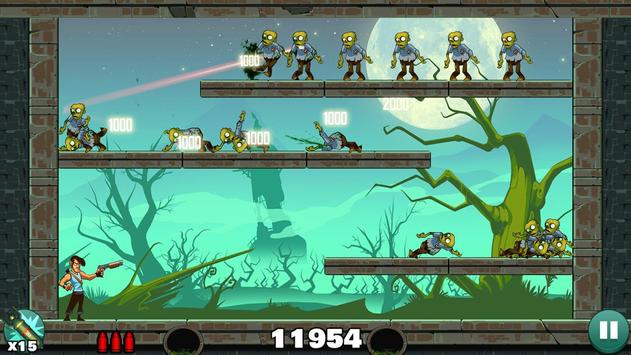 There are many games that have similar gameplay to Angry Birds, but Stupid Zombies is my favorite. Instead of flinging birds at pigs you get to headshot zombies with a shotgun. The goal is to factor in the ricochet of the bullets to kill all the zombies in as few shots as possible.
What makes it addictive? The same thing that makes all games like this so addictive. It’s super simple, and the star system makes you replay levels over and over until you get it perfect.
8)Super Hexagon:
Super Hexagon is a classic time killing game. All you have to do is keep your arrow from running into the closing walls. It sounds so easy, but it’s actually one of the hardest and most frustrating games on this list. It’s remarkably simple in concept, but brutally difficult when you actually play it. You have been warned.
What makes it addictive? The difficulty. You can easily die several times in just a minute’s worth of gameplay. When you do manage to stay alive for a while it’s exhilarating.
9)Threes: 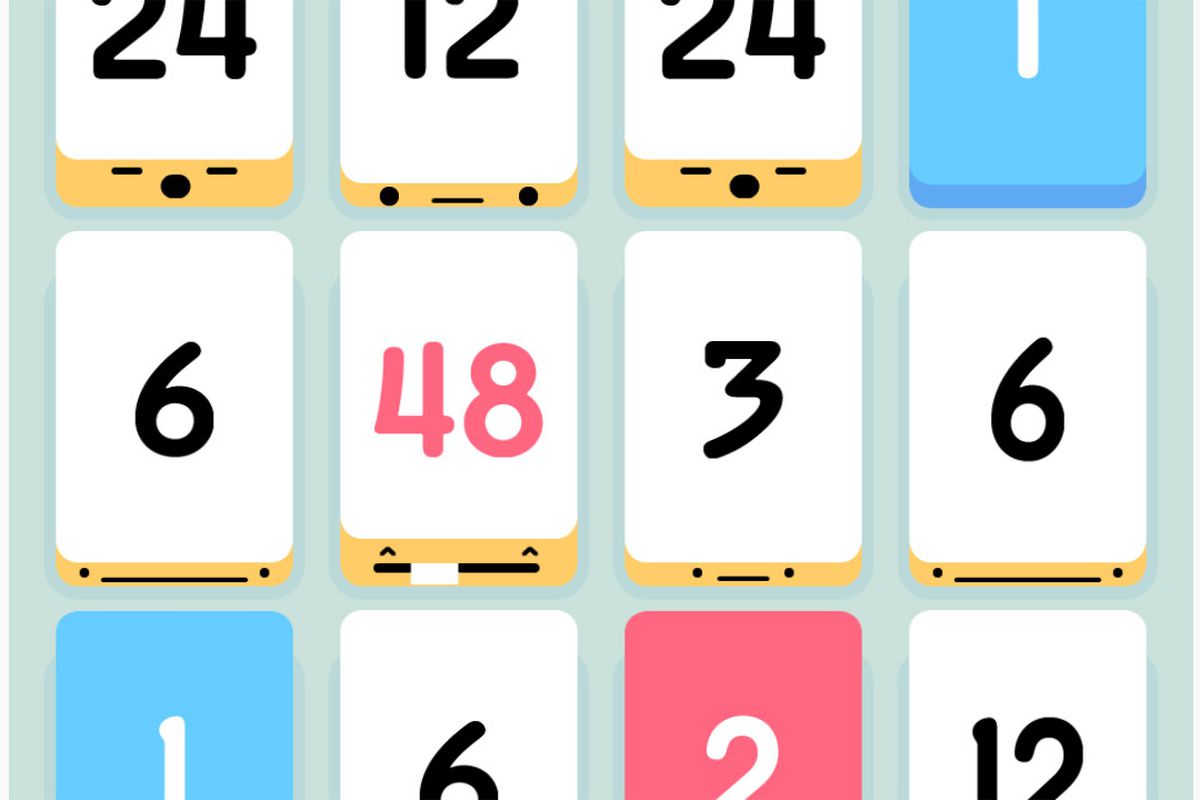 Threes! is a cute puzzle game unlike any other. The idea is to combine blocks to create multiples of 3, but you don’t need to be good at math to play. 1’s combines with 2’s to make 3, 3’s pair up with other 3’s, 6’s with 6’s, and so on. The goal is to make blocks with big numbers until there are no moves left.
What makes it addictive? It’s so casual. There is no timer or real goal to “beat the game.” All you do is combine blocks until there are no more blocks to combine. This can take 1 minute or 30.
10)Tiny Towers:

The last game on our list might be the most addicting of them all. In Tiny Tower games the main goal is to build your tower as high as you can. In order to do this, you need citizens to work in your shops and earn money so you can buy more levels. The citizens themselves also require your attention in order to do good work.
What makes it addictive? It’s so busy. There is almost always something that requires your attention. You’ll say “I’ll just do this one thing and be done,” but then something else pops up. Next thing you know 60 minutes have passed and you’re still playing.

When you hear “addictive games” there are certain titles that come to mind. These are games that have exploded beyond popularity among just the tech crowd. You can see them on t-shirts, TV shows, and candy wrappers. Since these games are so well-known we didn’t bother mentioning them in our Top 10, but here are a few just for old times’ sake.