Home best apps 5 Most Customizable Launchers for Android in 2020

looking for the best android launchers to customize your android phone? Here are the 5 Most Customizable And Powerful Android Launchers that You Must TRY for 2020. 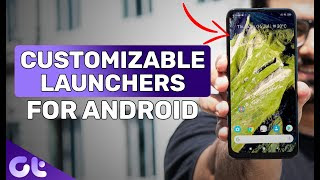 a lot of you guys want that pixel launcher kind of feel or you know that stock launcher kind of a feel but with a lot of customizability. You know launches that give you the full freedom to customize things as per your liking be it icons widgets shape visibility of apps and whatnot. Well that’s what this post is all about hey guys this is Drash from Androidjam and today I’ll be talking about five of the most customizable launchers for android that you can check out.
1. Nova Launcher

So starting things off is nova launcher which is so obvious i’ve been using nova launcher ever since i can remember like ever since android came into being and it’s still on my daily driver to this date. i still use it every day you start off with a simple desktop layout but you can customize it completely as per your liking.
change the style of grids add custom gestures change the style of folders use third icon packs and what not nova also has seamless integration with sesame for a faster universal search. now yes there are a couple of advanced features hidden behind the paywall but for five dollars it’s pretty much worth it. Download
2. Hyperion launcher

Now when you think of competitors to nova launcher you usually think of apex and action but i’m gonna stick with hyperion launcher which is one of the more recent launchers to come from the team by substratum. but is easily going neck to neck with nova hyperion offers pretty much the same smoothness like that of nova launcher along with some cool animations and a ton of features. you get folder cover gestures easy icon selection integration with google home feed multiple accent colors custom docks and even the ability to change the font. now similar to nova there is a premium version of hyperion launcher as well but there are frequent sales for that too. Download
3. Alpha Launcher

Next up on this list we have alpha launcher now like the name the launcher itself is super stable yeah i know that was lame but you know what’s not lame this launcher alpha is a lightweight yet feature-rich launcher. it comes with custom gestures to launch apps right from the home screen the ability to hide your apps and fully customize the icons. you get a handy mini bar as well to quick access your favorite apps and add tabs inside the app drawer to take organization to the next level. apart from all that you get the usual features you expect from a premium launcher all for the low low price of absolutely free. Download
4. Total Launcher

Now this video is about customizability and in that aspect the list would be incomplete without mentioning total launcher it’s literally the most customizable android launcher out there. but there’s a good reason why it’s kind of ranked low on our list see the launch in itself is great actually it’s a platform that allows you to make the launcher work in any way you want.
you start off with a standard dial in front of you with a contacts page and an app drawer below it but dig a bit deeper into the settings and you can change pretty much everything and customize the stuff the way you want it to look. the only caveat here is that there’s a very steep learning curve to it i know a lot of folks including myself who have spent over five hours just customizing the launcher to try and give it a custom look. Download
5. CPL (Customized Pixel Launcher)

Now I know that a lot of you guys want that pixel launcher kind of feel you know so why waste a lot of time investing in you know all these customizable launchers and trying to make it look like pixel launcher. and then make use of all those features why not just start with a pixel launcher and then take use of all those custom features. well, that’s where CPL comes in CPL or customized pixel launcher takes the google pixel launcher as a base and then adds a whole lot of customizability to it.
it was earlier known as the rootless pixel launcher though now it’s been upgraded with the latest version of the pixel launcher and comes with support for modern android versions. you can customize the dock the home screen setup add various gestures and a lot more. if you’re looking for a launcher that offers a ton of features but does not require you to spend a lot of time learning it. Download
Wrap Up
And with that we come to an end of this post now as always you can find the download links to all of the apps above that I talked about. also if you feel that there are any other customizable launchers that I missed out on feel free to comment down below. Best Android Apps 2021 India For Android – You Should Check Out