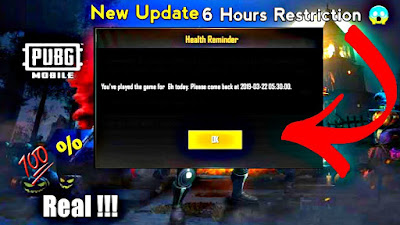 PUBG Mobile is insanely popular and infamous in India at the same time. The battle royale game has gathered the reputation of being one of the most addictive games of all time but at the same time, the strong addiction is proving to be harmful to a lot of students in the country. The game is affecting the performance of the students in an adverse way. Amidst a lot of controversies, the game has been banned in some cities of Gujarat. Now, probably as a step towards reversing that ban, reports say that the game may be updated with a time restriction soon. 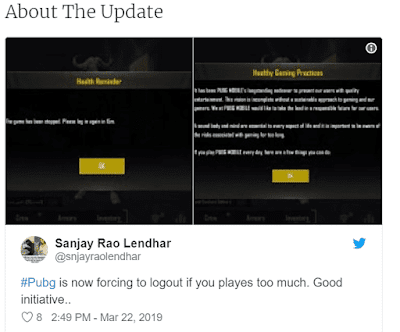 This seems like a pretty straightforward move by the company to take up accountability for the fact that the game is a negative influence on some students. Players may be locked out of the game once they play the game for a time period that exceeds the limit. Users on Twitter reported that they are being locked out of the game after playing it for a time period of six hours of usage. The game also issues “health reminders” after two hours and four hours regarding the same. 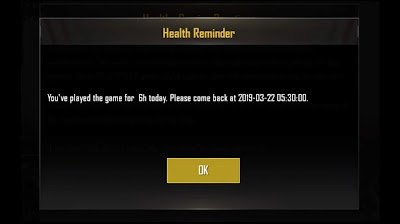 This initiative may be a part of an OTA (Over-the-air) update that’s being pushed out to select PUBG players in the country. Noteworthy, the time restriction may have something in relation to the age of the user. The hostility regarding the game can be attributed to the fact that children and students are ignoring their surroundings for the sake of the game, which is leading to heart wretching cases across the country. Earlier in March, a couple of students were mauled to death by a train while they were engrossed in the game. Previously, a 25-year-old person accidentally drank acid instead of water while hooked to the game. All these incidents have forced the Government to take harsh actions regarding the game. In reports earlier, 10 students were arrested in Rajkot, Gujarat for the same.

The company has released a statement asserting that it is hoping to discuss its objectives with relevant authorities and remove the ban on the game in the affected cities. If this is the case, this step may just brighten up PUBG Mobile’s image a tad bit in the eyes of Indian parents and other concerned authorities. Note that no official statement regarding the “time based” restriction is released by the company yet. Screenshots of the update are being shared across Twitter by disgruntled users, which suggests that an update may be on its way.
Subscribe Our Youtube Channel For More Videos
Thanks For Visit