Use Spotify as your daily music streaming platform? Then here we have a best Spotify tricks and features for you. 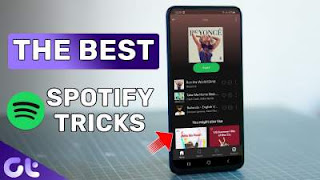 I use to define as my preferred music streaming service the clean UI the great music discovery options and the whole interface itself makes for a great experience. But did you know that even this clean UI hides some pretty cool features inside well that’s what this post is for? Hey, guys Im Drash from Andridjam, and today I’ll be talking about five super cool and essential features you need to know to enhance your Spotify experience.

1. Tip And Trick
Okay, so I usually like to listen to music while going to bed at night and well that’s good the biggest annoyance here is that I usually forget to turn off the music player. Now that usually means waking up with a dead phone because the battery drains throughout the night or even worse waking up with my dad staring me with a look that says dude, you’re super lazy. Now that is something that’s actually pretty true but well at least Spotify makes the whole process of turning the music down at night easier for me.
2. Tip And Trick
Now I know most of us are working from home right now and we don’t get out that often. But whenever we do Google Maps is one of the most used apps of them but did you know that you can actually link your Spotify account into your Google Maps so that you don’t have to keep switching the apps every now and then But instead use spotify inside the Google Maps well here’s how.
Well that’s so now each time you’re navigating somewhere you will get a Spotify icon on the right side so you can tap on it and a small media player will show up you can use it to easily change tracks or tap on the Browse tab to access recently played albums and playlists as well soo isn’t it pretty cool.
3. Tip And Trick
So while we’re on the topic of using Spotify while driving or vile in your car why not take a look at the car view see not every car has bluetooth media controls on the steering wheel and enabling the car view can make it quite easier to navigate through your music now to turn it on.
Now each time the phone connects to your car Bluetooth Spotify will automatically switch to the alternative you can manually turn the feature on by enabling the toggle next to always-on. Now as you can see the buttons are bigger the text is bolder and choosing your playlists is way more convenient. Now obviously you should not be using Spotify by driving but in cases when you’re stuck at the red light on a traffic signal you can easily use the car view mode to navigate through your music without any hassles.
4. Tip And Trick
Ok, so one of the best features to make its way to Spotify recently has been the canvas now. if you don’t know about it it’s basically one of those small looping videos that play when you are listening to one of those popular songs you know. Those little videos with the artist jumping around for about 2 seconds in a loop now it really does add on to the overall viewing experience. But then again, I am someone who really likes the overall play of you I don’t really fancy that canvas plus it takes up my data unnecessarily.
So I just decided to turn it off and well thankfully there’s an easy toggle for that so to do that just head over to your Spotify settings and scroll down to canvas this toggle it off and that’s it you can now view the player easily without that small video an infinite loop bothering you just like it bothers me.
5. Tip And Trick
Now if you Spotify listener I’m sure you must have your own playlists or playlists the other thing is adding songs to a playlist can be a tedious task. I mean it requires multiple tabs but then there is the light song playlist which is super convenient. So, the way it works is whenever you’re listening to a song simply tap on the heart icon on the left side and that’s it the song will then be added to your light playlist.
Now in order to access it later just head over to your library and select the light songs playlist and all your favorite tracks will appear there. The only downside to this trick is that you cannot share this playlist I mean seriously Spotify it’s been years that this feature has been there. But you haven’t made the feature to share the light playlist with anyone please and please bring that feature.

well that was it if you liked this post make sure to give us a thumbs up and subscribe to our blog for more awesome content till then this is Drash from Androidjam and will see you in next post.